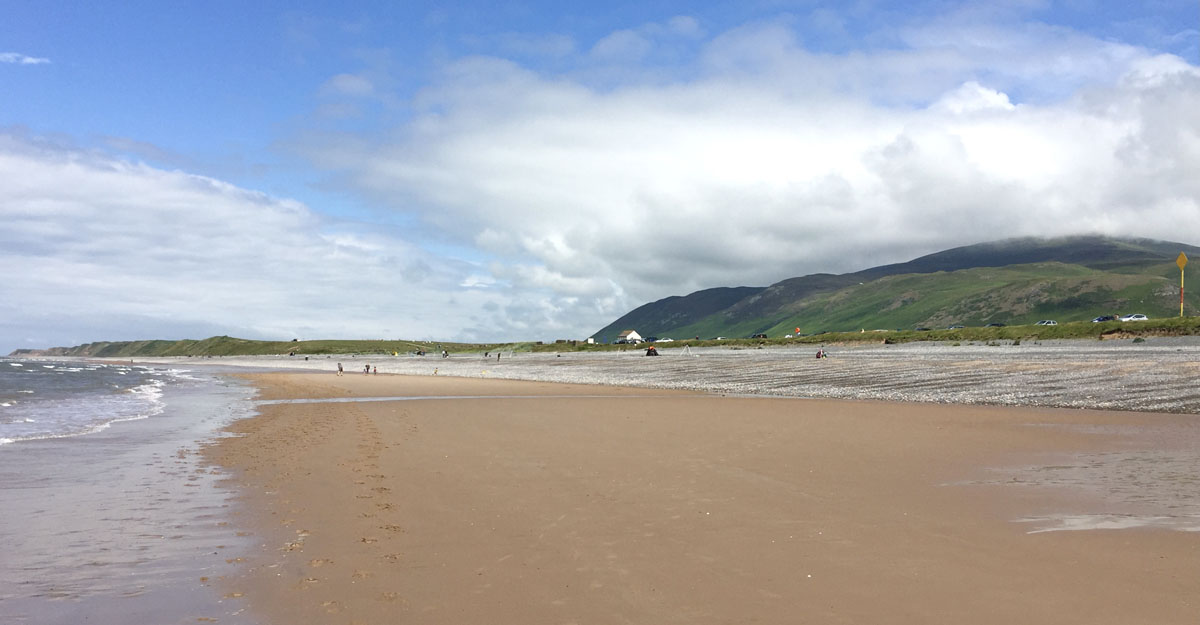 To Broughton and the Beach 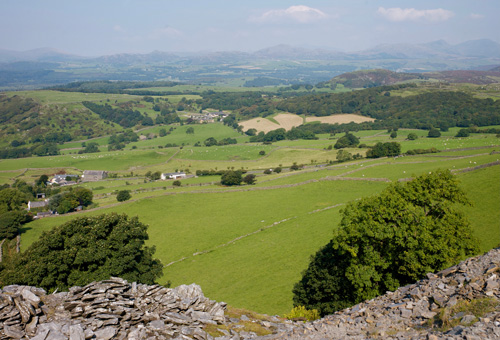 Off to the beach today - to Silecroft - because the village isn't a million miles from Howe Foot and 2021 is 'Cumbria's Year of the Coast'. On the way to the sea why not pop into the small town of Broughton-in-Furness, about nine miles to the west of Howe Foot, along the A5092 and then the A595.

It's a scenic drive there, a bit up and down, and a bit windy in places but you get lovely views along the way to the Coniston fells. Great views too if after three miles you turn left and head up the little road to the showroom at Burlington Stone. The showroom - closed at the time of writing, so check website for re-opening - shows the versatility of Burlington's slate for both home and garden. 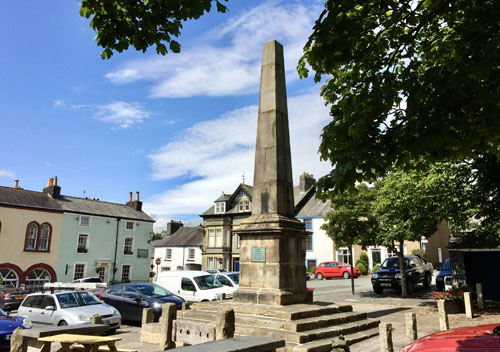 Broughton itself has a feel of rural France, with its handsome square, its chestnut trees and 18th century properties. The obelisk in the square commemorates the 50th anniversary of George III's reign (1810) and stands next to the old fish slabs of the market.

In the centuries that followed Queen Elizabeth's granting of a market charter - an event commemorated every year on August 1 - Broughton became a busy centre for the trading of sheep and cattle. There's still a small cattle and sheep mart but the market itself is no longer here and nor is the railway line which once passed through Broughton on its way northwards to Coniston. 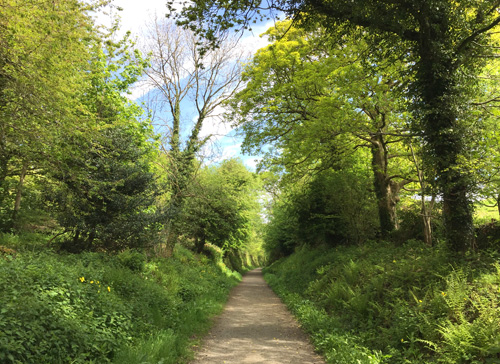 That line finally closed in 1962 - imagine what a nice run it would have been - but there's a lovely walk along part of the old route, starting a few minutes away from the square. The three mile or so return journey is one of 49 'Miles without Stiles', accessible walks designated by the Lake District National Park.

In fact to celebrate its 70th birthday this year, the national park has selected seven of those 49 routes which it feels really shows off 'the variety of landscapes and environments that the Lake District has to offer for all visitors'. Broughton railway is one of them. 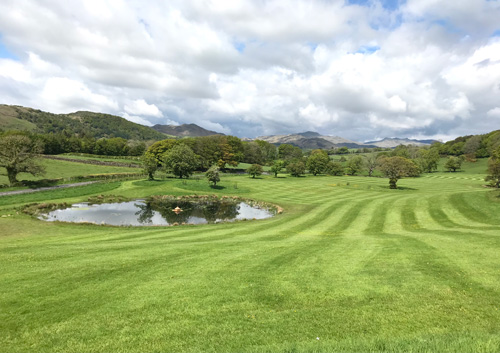 The first part of the walk takes you through a high, shady cutting where the rock sides support a variety of ferns and lichen. About 15 minutes after setting off you'll come to two small lakes with a bench overlooking each one. Take a break here and just enjoy the peace and quiet.

There's an obvious point on the track where you can't go any further, so one option is to return the same way. To add a bit of interest - although this is not part of the 'accessible walk' - take the footpaths through the grounds of Broughton Tower Estate, close to the lakes you passed before, and approach the market town from a slightly different direction. 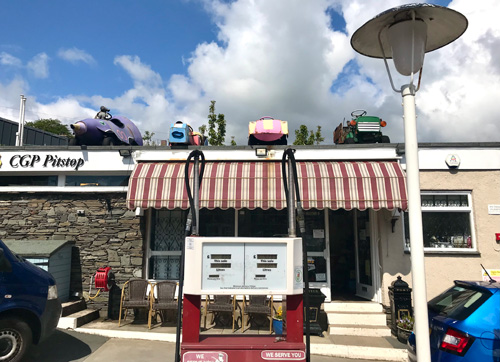 If it's time to refuel, try the Broughton Village Bakery. You'll love the huge baker's table just inside the door, laden with breads, pies, pasties, cakes and traybakes. If you want to refuel the car, the CGP Pitstop is a rarity in that a sign says: 'We serve you'. Note the toy cars on the roof.

As for pubs, there are three in Broughton and then there's another one - the Blacksmiths Arms - at Broughton Mills, a few miles outside town, off the A593 towards Torver. What makes this pub rather special is that inside it's much the same as it probably was in the early 19th-century. That's why it's one of only about 300 places on the Campaign for Real Ale's National Inventory of Historic Pub Interiors. 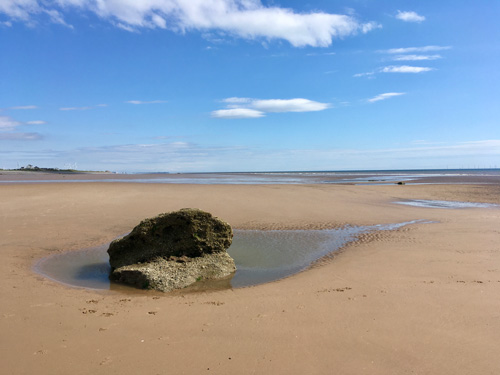 And so to Silecroft, about eight miles to the south west of Broughton on the A595. It's one of Cumbria's great beaches, about three miles long, with a mix of sand and shingle, overlooked by the well known fell of Black Combe. There's a big car park here and a railway station at Silecroft too.

Walk as far as you like. In fact you could go all the way to Whitehaven because the 32 mile stretch of the England Coast Path from Silecroft to Whitehaven opened earlier this year.

You might see fishermen and dog walkers on the beach, you might see horses cantering along the sand, you might spot people in the sea. You'll certainly feel invigorated. 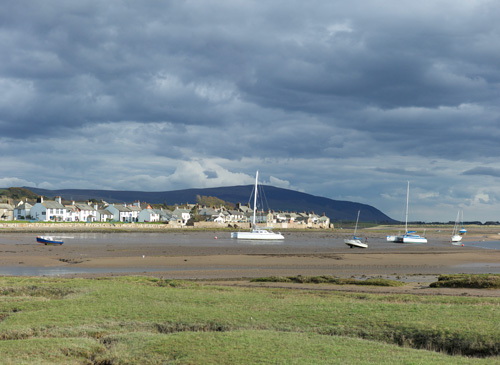 'Cumbria's Year of the Coast' is a celebration of more than 100 miles of the county's coastline that stretches from Morecambe Bay in the south to the Solway Firth in the north. It's a coast that takes in places like Arnside and Grange-over-Sands in the south, Ravenglass in the south west, and St Bees, Whitehaven and Maryport in the west.

Ravenglass (pictured), about 12 miles north of Silecroft, was once a busy trading port and also home to the Romans for over 300 years. The remains of a Roman bath house can be found just outside the village. Ravenglass is also one end of a narrow gauge railway line which goes all the way to Dalegarth in Eskdale. If you've still got time after visiting Broughton and the beach, the seven mile, 40 minute train trip is most definitely worth making.