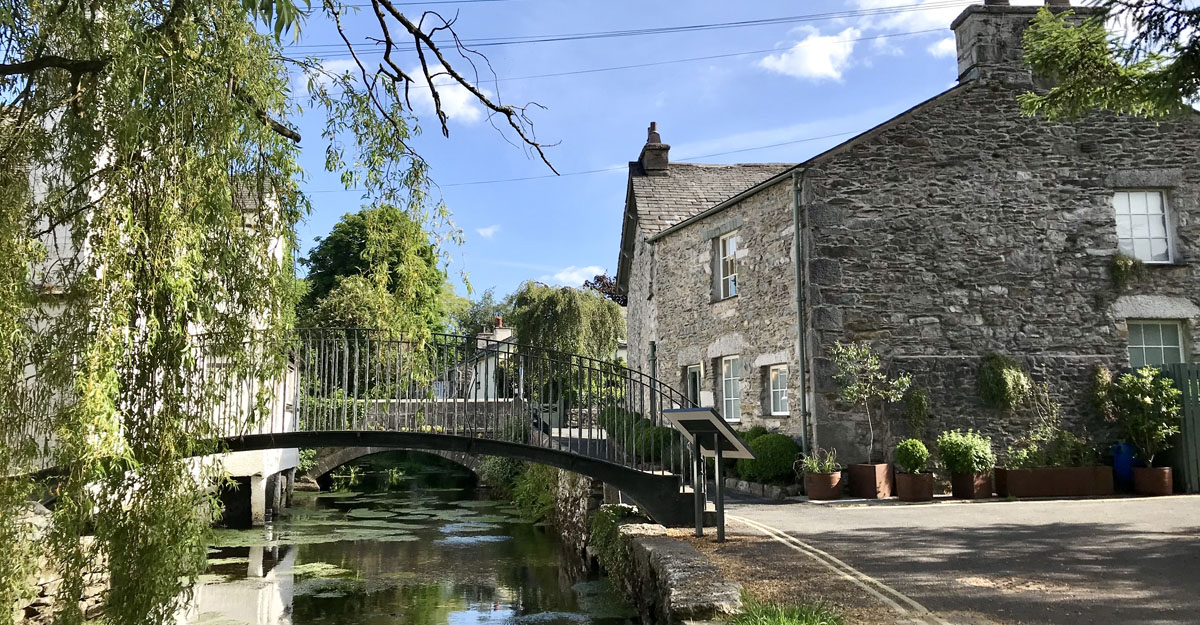 A Trip to Cartmel & Holker Hall 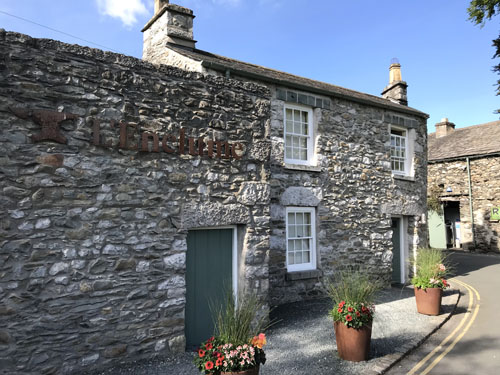 Early morning in the small, pretty village of Cartmel, about 12 miles south east of Howe Foot. There's a lovely buzz of activity around the narrow lanes as staff from Simon Rogan's Michelin starred restaurants start their working day.

Since opening in 2002, L'Enclume (three stars) has been a major draw for foodies and then in 2008 the opening of the chef's second restaurant here, Rogan & Co (one star), added another reason to visit Cartmel. 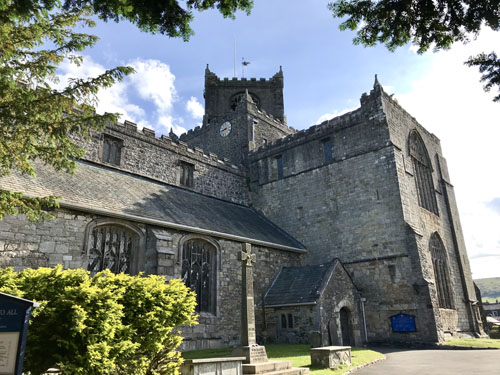 This means that even without a lake or a literary connection to speak of, Cartmel still packs a punch for a place of its size, the major attraction for many being the 800 year old Priory Church of St Mary and St Michael, one of the glories of Cumbria.

The priory was founded in 1189 when a dozen or so monks arrived from Wiltshire to take up residence, and the oldest parts of the church date from within 50 years of that time.

It's a big building, something you'll appreciate if you stand at the west end and look up the nave towards the wonderful, 45 feet high, 15th-century east window. 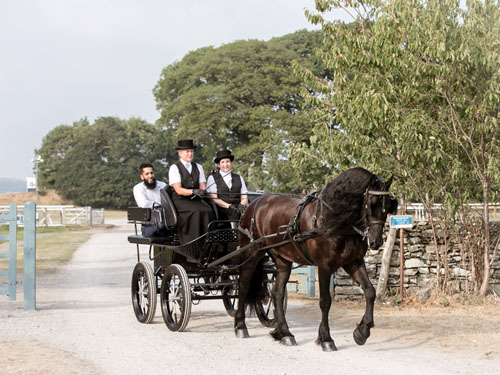 If you're coming to Cartmel, the biggest and best place to park is by the racecourse where nine meetings are held a year, each one attracting thousands of people.

Much more sedate than racing at Cartmel are the horse drawn carriage rides you can take around the village with Black Horses. The name comes from the Friesian horses which the firm breeds and trains at its farm just outside Cartmel. 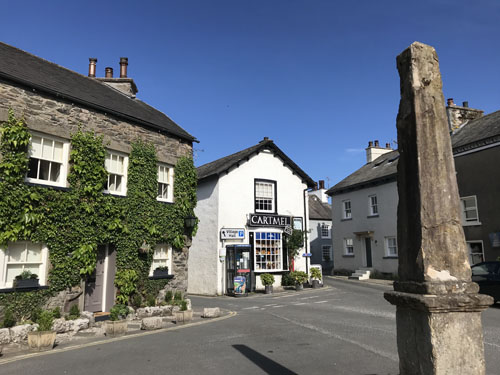 Back to the horse racing and tradition has it that every winning jockey is given a Cartmel sticky toffee pudding, the dessert once made in the Cartmel Village Shop which you'll pass as you come into the market square from the car park. The shop itself sells all manner of food and drink, including the range of Cartmel puddings.

Many years ago the building was used by the farm next door to cure its bacon, which explains the numerous meat hooks hanging from the ceiling. Later the premises became a post office (that's now elsewhere in the village) but the original counter remains in the shop. 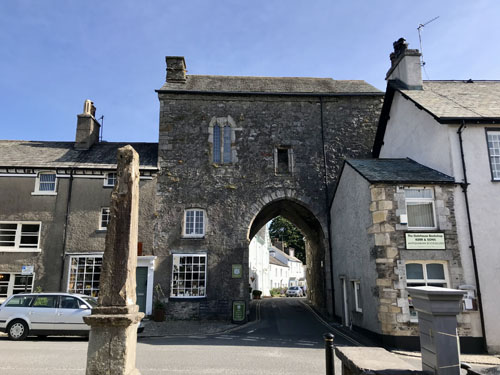 Overlooking the square, with its market cross and stone slab where traders used to display their fish, is the 14th century gatehouse to the old priory.

To the left of the archway is Simon Rogan's kitchenware and regional produce shop; L'Enclume is through the arch on the right hand side, after the Cavendish Arms.

The latter is a 450 year old coaching inn where the former stables are now the bar. The flower tubs and flower baskets here lend a wonderful splash of colour to this narrow street in summer. 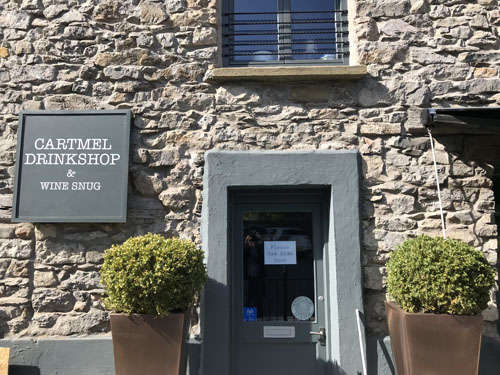 If you carry straight on from the square, past two more pubs, the Priory Hotel and Cartmel Coffee, you'll cross the little bridge over the River Eea and spot Rogan & Co on the right. A bit further on, also on the right, is Unsworth's Yard with its wine shop, cheese shop and small brewery. The Mallard Tea Shop is here too.

Unsworth's Yard Brewery is one of about 30 small breweries now operating in Cumbria, its beers having names like Cartmel Thoroughbred, Cartmel Peninsula, Crusader Gold and Land of Cartmel. 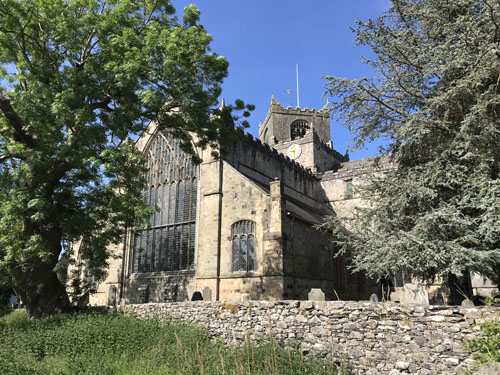 Right opposite Unsworth's Yard is the priory church which thanks to local parishioners still stands after all those centuries. In the 1530s they successfully argued that they would have no place of worship if the church was destroyed and so, even though other monastic buildings here were lost during the 'Dissolution of the Monasteries', the church itself was saved.

Its distinguishing feature is the upper part of the tower which stands on the lower section at an angle of 45 degrees. Inside, at the end of the nave, the carved Jacobean screen takes you through to the 15th-century choir stalls and that beautiful east window. 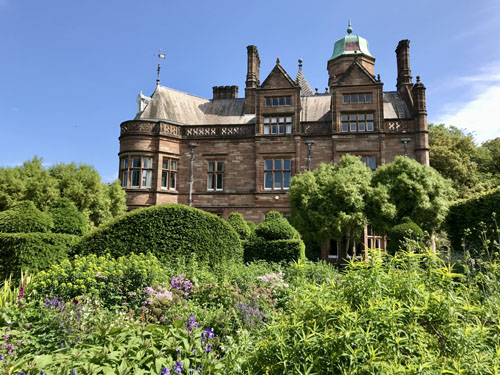 About five miles south west of Cartmel is Holker Hall, home to the Cavendish family since 1756. It's certainly worth a visit, the hall re-opening to the public on July 21, the gardens already open. But please check the website - www.holker.co.uk - for the latest information.

In all the years that the Cavendish family has lived here, one single event probably stands out above all others: the night in March 1871 when fire consumed the entire west wing, destroying its rooms, paintings, books, statues and furniture. 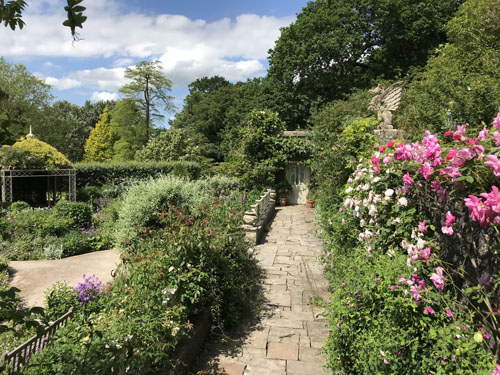 William Cavendish, the 7th Duke of Devonshire, remained undaunted and had the wing replaced by something even grander. This is the part of the house, designed by renowned Lancaster architects Paley and Austin, which is open to visitors today.

A leaflet with your entrance ticket gives information about Holker and a map of the 23 acres of gardens, 'Garden of the Year' at the BBC's Countryfile Magazine Awards 2015-16. 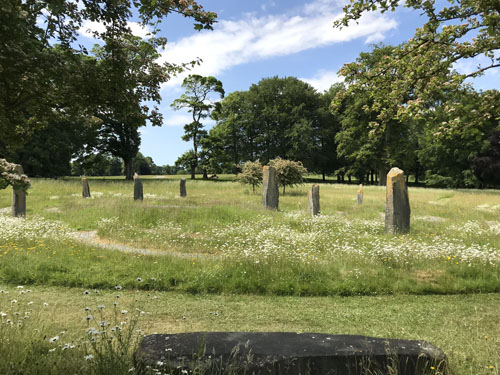 Wander around and admire the formal gardens and all the other areas that have been created over the years: the Summer Garden, Elliptical Garden, Sunken Garden, the Holker Labyrinth and all those parts - some with mown paths - which have been kept 'meadowy'. Take a break on one of the seats dotted around and check out the great Holker lime tree.

Likewise the house has plenty of interest with its different rooms, fine furniture, paintings, fireplaces, library books, china, elegant plasterwork and a grand staircase. A visit to the courtyard café, the food hall and a gift shop should round off the visit nicely.