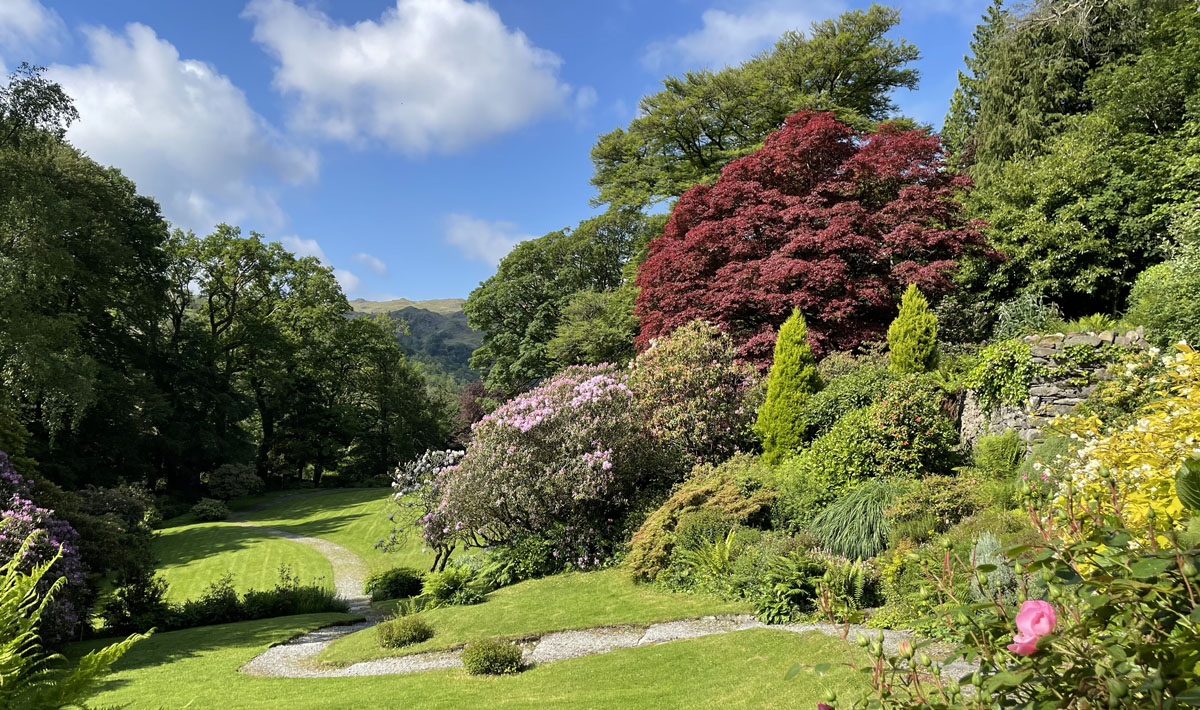 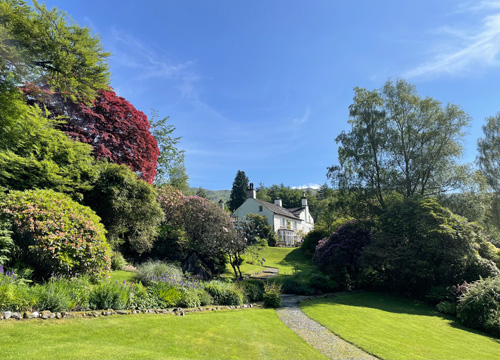 Nine o'clock in the morning at Rydal Mount, not far from Rydal Water. Sixty minutes before the house and gardens open to the public, so a golden hour to savour the stillness and singular quality of the place that kept William Wordsworth here for 37 years.

He moved to Rydal Mount in 1813 and the five acres of gardens are pretty well as he landscaped them. You can even walk up the 14 stone steps - which he created - that led from the house to the sloping terrace where the poet paced back and forth, trying out his verse. 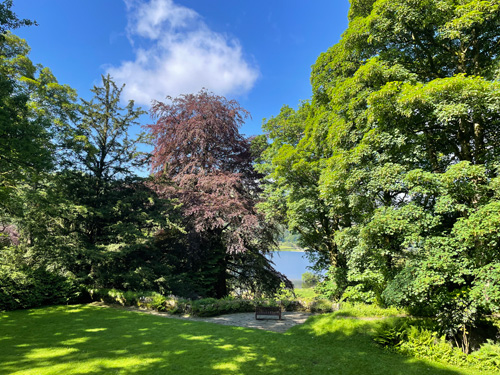 It's this sense of the great man living, working, writing and reciting that adds an extra something to a visit here. As does the manifestation of his belief that a garden was best when both informal and in harmony with the surrounding countryside.

So, to borrow and adapt a phrase from his famous poem 'Daffodils', 'I wandered lonely without the crowd', admiring the herbaceous borders, the wonderful trees, the shrubs, the stone and wooden summer house and the glimpse of Rydal Water from a bench at the end of the garden. 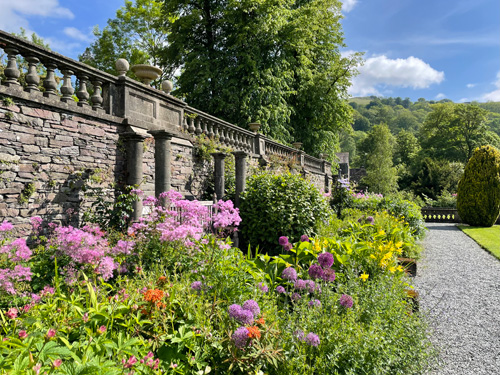 Forgoing coffee and cake in the Rydal Mount tea room, I crossed the lane to Rydal Hall where the gardens were first developed in the 1600s but then totally redesigned and rebuilt in 1909 by Thomas Mawson, the Windermere landscape designer.

One of the major features at Rydal Hall is one of the earliest uses of pre-cast concrete for the terracing, ballustrading, steps, fountains and urns in the formal garden. An impressive sight, even more so with the borders beginning to show their true colours. 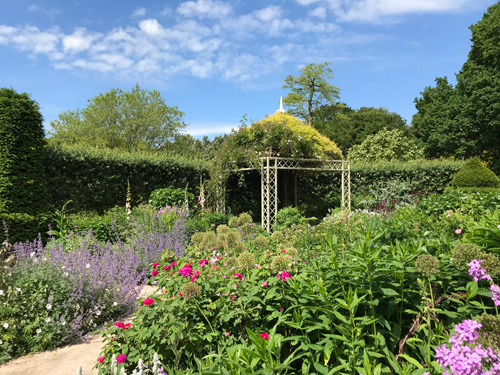 Although Thomas Mawson also had a hand in the designing of the gardens at Holker Hall, near Cartmel, the most impressive features at this historic home have come in the last forty years or so.

There's been the creation of the Sunken Garden with its climbing roses and clematis, the Neptune Cascade, the Elliptical Garden, the Summer Garden (hornbeam hedges, Portuguese laurel arches and old fashioned roses), a wildflower meadow with more than 25 species of native perennial wildflowers, the Holker Labyrinth and the Pagan Grove amphitheatre. 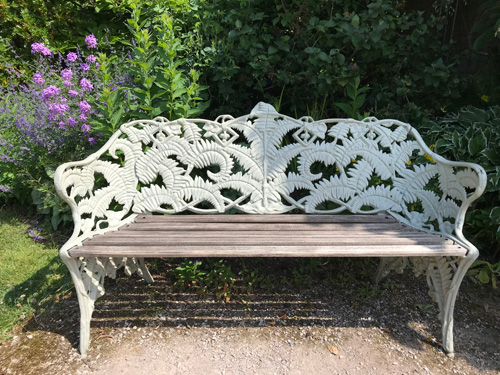 But not all is new. The great Holker lime, with a girth of almost 30 feet, was named as one of '50 Great Trees for 50 Great Years' in tribute to the Queen's golden jubilee. It dates from the 17th century.

I visited Holker last year when staying at Howe Foot - it's about 30 minutes away - and loved all the different areas of the garden, plus the little statues you come across, the different benches dotted here and there, and the way that wide swathes have been mown through the longer grass. 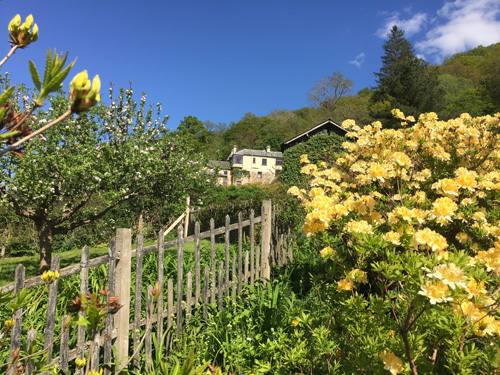 To the north of Howe Foot and on the east side of Coniston Water is Brantwood where the great Victorian John Ruskin lived for 28 years. Holker may be grand, but Brantwood is one of a kind in that Ruskin used the fellside garden and woodlands of his estate to explore matters of aesthetics, land management and the environment.

When I first visited the garden many years ago there was little evidence of Ruskin's ideas and work because after his death in 1900 the 25 acres of fellside garden lay completely neglected, much of the ground choked by Rhododendron ponticum.

But thanks to the then head gardener Sally Beamish and a team of volunteers, the site was cleared and just as archaeologists slowly uncover evidence of past civilisations, so Ruskin's woodland paths, stone steps, tumbled walls and different garden areas were revealed.

Then the real restoration began, as Sally explained. 'Where we know what Ruskin did in the garden from photographs, letters, diaries, newspaper cuttings, paintings or magic lantern slides, we are trying to restore that area in an appropriate way.' 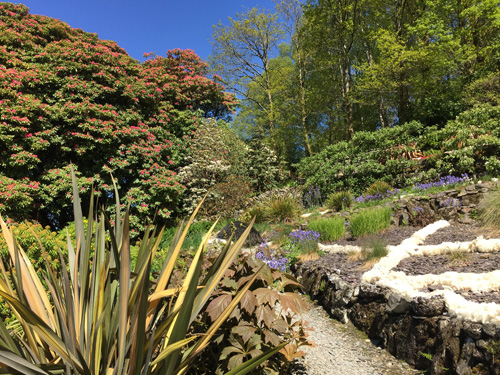 So today when you visit Brantwood you'll find eight distinct gardens, including the 'Fern Garden' with over 250 different types of British native ferns, the 'Hortus Inclusus' and its British native herbs, the 'Harbour Walk', the 'Trellis Walk' and the 'Professor's Garden', Ruskin's favourite.

The most unusual is the 'Zig Zaggy', its use of unexpected planting and natural materials illuminating a journey through the seven deadly sins of pride, envy, wrath, sloth, avarice, gluttony and lust, exploring the vision of Dante Alighieri's path through Purgatory to Paradise. 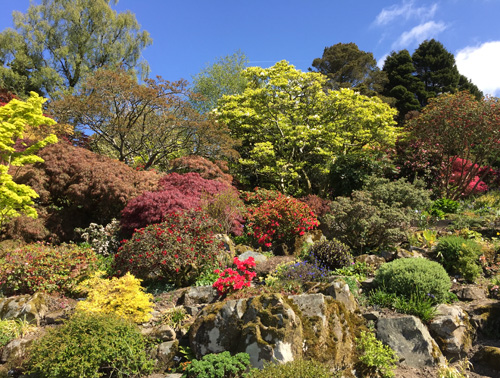 Another hillside garden is Holehird, near Troutbeck where the 12 acres are home to both the Lakeland Horticultural Society and four national plant collections (Astilbe, Meconopsis, Daboecia and Polystichum Ferns). 20 years ago it was voted one of the nation's favourite gardens on the BBC's Gardeners' World programme.

Looked after by the Society's volunteers, its centrepiece is the Walled Garden, with north, east and west-facing borders, a south-facing wall and five island beds showcasing a range of planting styles. There are several glasshouses too. 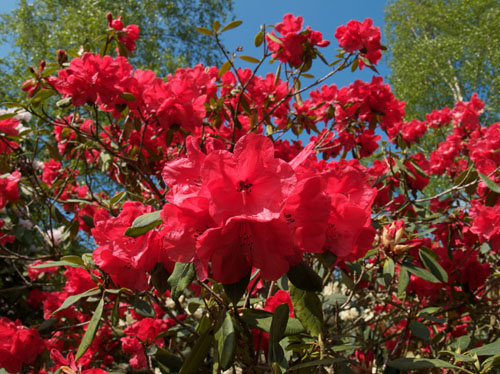 For the garden enthusiast, there's plenty more to go at as well. Levens Hall near Kendal, is famed for its topiary while roses and herbaceous borders are the thing at Dalemain near Ullswater and Hutton-in-the-Forest near Penrith.

Thomas Mawson designed the gardens at Brockhole, the Lake District Visitor Centre which overlooks Windermere. Muncaster Castle, near Ravenglass, has a great setting too, the gardens well known for their rhododendrons, camellias and azaleas. As at Wordsworth's Rydal Mount, the rugged Lakeland landscape is never far from the gardener's human creation.